While I am waiting to get my camera back with the rest of my pictures from my last trip to Victoria I thought it’d be good to make a post about one of the specialty beers I got to sample while I was down there. As some of you may or may not know Spinnakers offers a specially hopped cask offering every day of the week from Monday through Friday. What they do is take a smaller keg of their beer and dry hop it with a hops varietal. As I was told it usually only lasts about an hour or less before the whole keg is gone. We were there too late to try the ESB with Willamettes on the Thursday, but I made a special effort to get in on the action for the Friday.  Even reading what it was got me excited, their Northwest IPA with Citras.

I’ve already gone on at length about my enjoyment of the hoppier beers so let me suffice it to say, it was divine. The lemony dry hopping from the citra’s added an extra floral layer to this already excellently crafted beer. I had to rush off to dinner before finishing my pint, but thanks to eating in the same establishment (only downstairs) I got to take it with me.

I’ll be covering the Northwest IPA by itself later in the blog, but this was a special treat for me. Because it was a cask offering, served direct from a keg atop the bar, all the delicate floral notes were well represented. Another note is because it is dry hopped in the keg there was some sediment. Not a problem just a note. 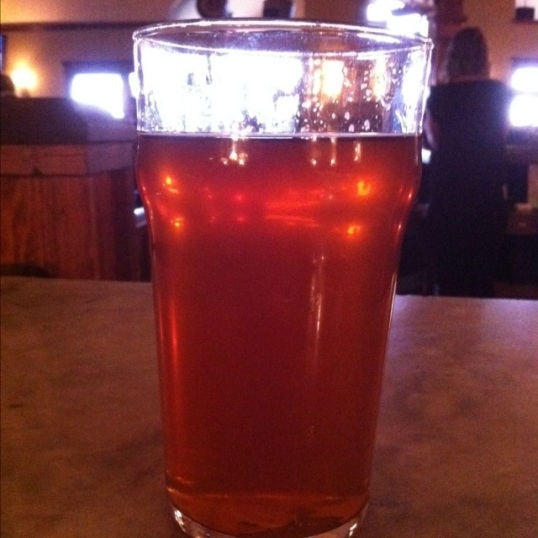