I’m always eager to try new beers from different countries. While this wasn’t my first beer from New Zealand I’d say it is my first NZ Craft Beer. I’d already been exposed to a couple of kiwi hops strains with the Lighthouse Tasman & Hopoxinator, but this is a true blue kiwi brew. This beer came very higly recommended from the staff at Cascadia Liquor Store in Victoria.

It pours to a clear amber colour with a frothy white head. There are a lot of large  bubbles. It smells super floral, lots of passion fruit scented hops. I’m initially surprised about how bitter this beer is despite having such a large amount of fruitiness to it. I definitely get similar flavours of hops like Dean used in the hopoxinator, passion fruit and sweetness. I guessed this as a 60+ IBU(listed as 70 on the site) but delicious. As you sip it the pineyness resonates in your mouth. There is a prolonged bitterness that sticks with you. A very good IPA, although it is a bit pricey. $10/500ml bottle. 7.3% ABV. “Tropical punchbowl” agreed. 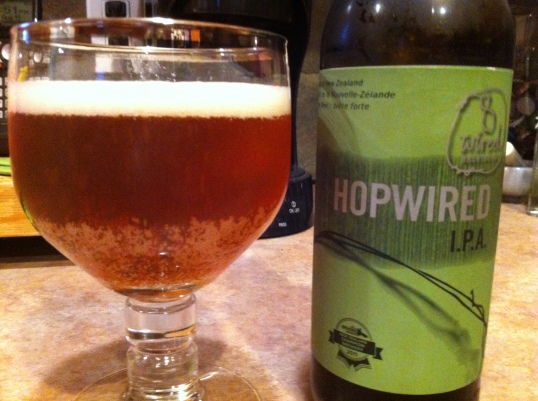 We’re pretty sure HopWired is the first bottled new world India Pale Ale made with NZ grown pale ale malt and 100% unique NZ hops. We bet you’ll find nothing else like it on the shelves. Although there’s plenty of malty sweetness, this beer is all about the hops. But unlike an American IPA, which will mainly challenge you with grapefruity and pine-like flavours and aromas, the kiwi hops used in HopWired produce something more like a tropical punchbowl: Passion fruit, limes, oranges and Sauvignon Blanc grapes to name but a few. A local Marlborough winemaker even said it smelled like gooseberries… Gooseberries? When did you last actually smell a gooseberry??Decide for yourself, or just enjoy it without further complication. Cheers!

I’ve got a couple of other 8 Wired Brewing beers to review coming up. As good as this one is I’m really looking forward to the next ones.