I feel that I’ve fallen behind a bit in showcasing the Vancouver Island beers so I thought I’d take a week to post about some of the recent seasonal and limited release beers. To start things off I’m going with the most recent holy grail of BC beers, Sartori Harvest by Driftwood.

So what’s all the fuss about? For the uninitiated, when the Sartori Cedar Ranch has their hops ready for harvest they put the call out. Several breweries get hops from this ranch for their beers. Another brewery posted a nice video about visiting the farm, you can watch it here. When Sartori Harvest IPA is released there is a flood of craft beer enthusiasts that swarm the stores looking for them. In some cases the stores have to limit the amount people are allowed to buy to ensure that more people get to try it.

The Sartori Harvest is a wet hopped beer, meaning that instead of adding a kiln dried hop they use the cones direct from the vine. As soon as they are harvested they go into the beer. While I’m not 100% certain on the time frame between harvest to addition it is a very different take on flavour infusion. I have had a chance to sample quite a few different wet hopped beers, and Sartori Harvest was one of my first.

Before I get into this beer, being that it was my first taste of Sartori Harvest IPA, but I wondered if it could be based on the same recipe as Fat Tug. A bit of research on the website for Sartori reveals that it is not.

This wet hopped IPA can only be brewed once a year, immediately following the hop harvest, when fresh wet hops are spirited from the farm to our brew kettle. The 2012 version features Centennial hops from the Sartori Cedar Ranch and local malted barley from Vancouver Island artisan maltster Mike Doehnel, making this a true BC harvest ale!

Partial proceeds from the sale of each bottle will be donated to The Land Conservancy of BC.

This beer is much lighter in colour than the Tug, almost orange & gold with a thin head on top. I thought the beer appeared to be lighter carbonated than I expected, but appearances were deceiving. It has a thick scent to it as well, washing over of grapefruit and pine. It smells similar to sap almost. I’ve never held a wet hop cone, but I imaging it would be very sticky like a green pine cone. This beer is very two part in the tasting. Initially it is all bitter and hoppy, citric and tart. But after that it washes over you with a excellent subtle maltiness. Not a sweet malt, but definitely enough to showcase the local malted barley. An excellent IPA, well worthy of all the hype that came along before its arrival. I consider it a walk-off home run by Driftwood. 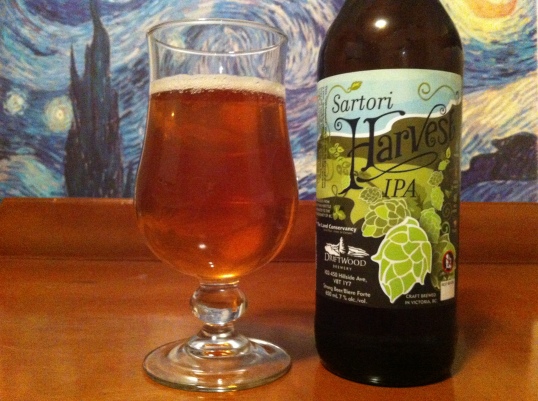 I did manage to snag a couple extra bottles of this and it will be featured in the ‘Best of Leapbeer’ tasting event in December. I’m not 100% set on a date yet, but I’m guessing sometime in the middle of the month.