This next set of beers that I’m covering in the leapbeer blog is the Pod Pack from Vancouver Island Brewery. It seems like this beer mixer is one that I regularly pick up. It has a nice assortment of beers and is pretty available on Vancouver Island.

There are two iterations of this mixer, the summer and winter Pod Pack. Both packs include three of the same beers, Pipers Pale Ale, Sea Dog Amber Ale and Hermann’s Dark Lager. The difference between the two is in the Summer it includes the Spyhopper Honey Blonde Ale, whereas the in the winter they have the new winter seasonal Storm Watcher Winter Lager.

First up is the summer inclusion, the Spyhopper Honey Blonde. In case you didn’t notice it, there’s a bit of a theme with a few of the Vancouver Island Brewery beers. They have an Orca whale on their logo, the pack is called a Pod (aka a grouping of whales) Pack, and this beer is named after a type of whale surfacing behaviour, Spyhopping.

This is a clear golden coloured beer with a thick head that dissipates over time. It has a lovely honey and malty aroma. It is a not-overly sweet beer with some nice bitter notes. It is lighter fare, and super easy drinking.

One cool thing with the Spyhopper Honey Brown, a friend of ours who does handmade soap actually makes one with this beer with oats and hops. You can see her stuff at the facebook page for Quadra Island Soaps.

Second up is Piper’s Pale Ale. Back when I lived in Nanaimo, only about an hour northwest of Victoria, that this beer was named after Piper’s Lagoon, a popular park to go there. I was wrong, however, as this beer is actually named after Canadian war hero Piper James C. Richardson. But that’s why we do research.

Back to the beer. This clear golden amber /copper pale ale has a light malty scent to it. The taste is very smooth, with roasted caramel malts and a light bitterness. I picked up a hint of flavours reminiscent of either apricots or oranges.

Next up is the Sea Dog Amber Ale. This is a german altbier style ale. Just west of downtown Victoria, in neighbouring Esquimalt, is the base for Canada’s Pacific Naval Fleet. Vancouver Island Brewery brewed this beer as a tribute to CFB Esquimalt and Victoria areas naval heritage. This is a clear light brown beer that has a rich aroma of malt and grain. I pick up what I think is a hint of clove in the scent as well.  This is a deep malty beer, very rich and sweet. There is a light bitter note to it. Despite the richness of this beer it is still very smooth and drinkable.

Lastly I’m adding Hermann’s Dark Lager to the blog master list. This is a dark chocolate brown / near black coloured beer. The aroma is very distinctly lager-ish with a toasted malt addition. The roasted malts really come through in the taste, but the malts dont overly sweeten the beer. There is a very minimal aftertaste from this beer (likely from the lager yeast), making it extremely easily drinkable.

The last cask event I was able to go to featured the next beer, Storm Watcher Winter Lager, and I reviewed it from that night. I didn’t have a great picture of it then, so I wanted to include a better one in this post.

A couple of other interesting things to add to this post. If you check the links for each of these beers, Vancouver Island Brewery has included a recipe using each of the beers. Also, there’s a very cool new website that will be up soon, Victoria Beers, doing a photo museum featuring the great beer produced in Victoria. I saw the picture on their twitter stream, that was of the originally produced Vancouver Island Brewery beers from back in 1984. 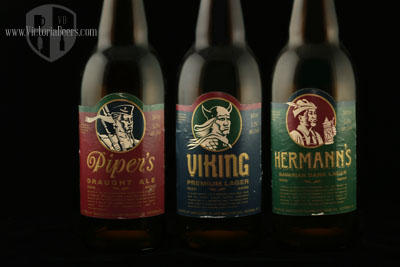 A big thank you to Jeff, Rob and the rest of the Vancouver Island Brewery crew for all your help and support. I still have a couple of their beers to cover in the blog so be sure to look for them soon. Also thank you to Matt Schmitz for the use of his photo.

And thank you, my readers for following the blog.