Archive for the tag “belgian triple”

The other day I was at Merecroft Village Liquor Store I noticed that there was a deal with the Unibroue mixer packs. With the purchase of a twelve pack you get a free stemmed glass.  As I am an absolute sucker for free glassware I couldn’t say no. It included 4 beers, La Gaillarde, Blanche de Chambly, Blonde de Chambly & La Fin Du Monde. The last of which already holds a place on the leapbeer master list, #47. If you recall I kind of ripped that beer for being overly yeasty and sweet. This was very early in the leapbeer journey (February), but since that time my palate has definitely changed. I’ve had a chance to revisit this beer, and now I quite like it (But I’ll get to that later in the post).

First up is La Gaillarde. This is a Belgian style Pale Ale. According to Canadian Beer News (link below) this a beer that they only recently been brought back after over a decade on haitus.

Inspired by an ale recipe from the 16th century, La Gaillarde was first brewed in 1995 for the Québec Medieval Festival, and remained in production until late 1999 when it was discontinued.  (Canadian Beer News)

La Gaillard is a cloudy golden beer with a pillowy white head on top. There’s lots of tiny bubbles in the abundance of carbonation. It has a very complex bouquet, smelling of lemon rind, biscuits, dry white wine and grapes. It is a very bubbly beer, with a strong initial alcohol thump up front. Then it settles to a dry and bready beer. It’s almost if apple cider was meshed with a Belgian pale ale. Nice and refreshingly clean finish. 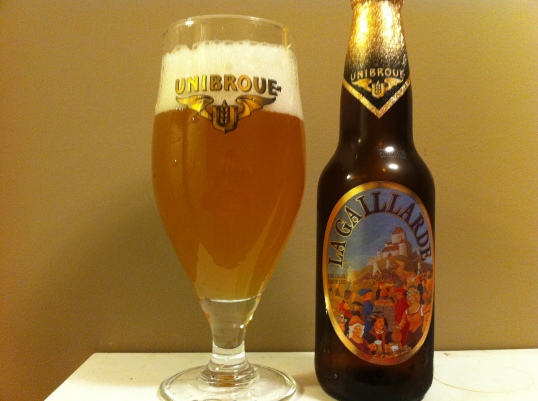