Archive for the tag “eisbock”

There have been several blog posts about cellaring beer in the craft beer crew, so what can I hope to add another to the mix. Beeradvocate gave us a very thorough explanation about how to store beer, and which beers are good for it. Vancouver based beer blogger, Barley Mowat, has done something extrememly similar (but he adds pictures). Vancouver Island beer blogger allum (although I grimace as I say that, I’m not even in his league let alone the same court) Ian Lloyd, aka Left4Beer took his kick at this same can too. (Note: To view these posts I’m referring to please click the links embedded in their names)

The reason I chose to toss my hat into this ring was because it was a completely unheard of concept to me one year ago. I, like many out there, thought old beer = bad beer. I mean obviously beer is meant to be drank as soon as humanly possible (unless of course you think I’m encouraging drinking in the store or in your car on the way home. DO NOT DRINK AND DRIVE!) I should say, consumed as soon as reasonably possible.

Not quite what I mean by aging your beer (photo from agefotostock.com)

Why do beer geeks the world over choose to shell out top dollar for “fancy-pants brews” (pending TM) just to let them sit in a cellar until they can’t hold out any longer. Quite simply put, because it *can* make them better. I say can, because generally cellaring beer is saved for many styles, but not for others. Something like a fresh hopped beer is best consumed fresh. Even any dry hopped beer should be consumed as soon as possible, as those hop characteristics really diminish with time. Where aging beer really shines (in my limited opinion) is when it comes to high test stouts, bocks and sours. The rule of thumb I’ve heard is ‘If it’s at or over 9% ABV, it will age well”. I’ve spent some of this year collecting different beers and adding them to my cellar. Some of which I’ve tasted during the course of this year, but most of which I haven’t.

Another interesting ‘journey’ beer lovers are known to do is what is called a ‘Vertical Tasting’. As you may have guessed you have the various years of one beer and taste them to examine the nuances, changes and journey the beers have gone through. Recently left4beer and Jeff Kendrew did a three year vertical tasting of the same beer I chose to examine cellaring.

I devised a test to examine what cellaring beers actually does. I took two bottles of Hermannator Ice Bock by Vancouver Island Brewery, one from 2011 (a gift from a co worker Michelle, Thanks!) and one from 2012. The 2011 bottle has been aging in my ‘cellar’ (aka a stack of beer boxes in my downstairs closet) over the course of the hear. Hopefully this 9.5% ABV eisbock (or Ice Bock) style beer will have changed some. I’m going to use similar styled glassware (tulip/snifter) with a similar approximate six ounce pour.  I’ve got three criteria I’m going to be judging these beers on, Appearance, Aroma and Taste. Then I’ll divulge my overall thoughts of these two beers. Bear in mind that the batches may have some differences in the brew, but the recipe is very close from year to year. I served these beers directly from my cellar, meaning they’re between 10-12 degrees Celsius. Here’s the combatants. 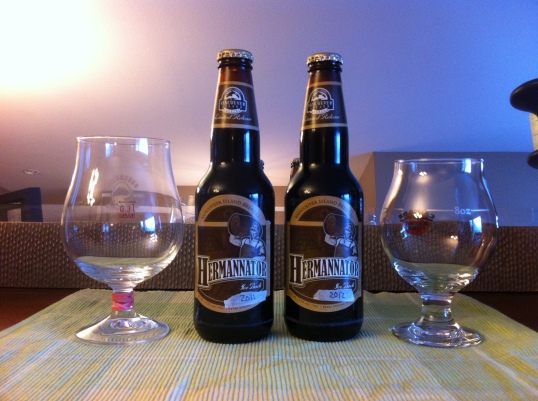