I was really pleased to see this beer hit the shelves when it came out. Vancouver Island Brewery, the Elder Statesman of the VI brewing scene if you will, has a great stable of fine products. That said they don’t usually venture out of the norm when it comes to beer styles. They have their pale ale, their blonde, the nut brown, the ipa, and the red. They also recently released their Beachcomber Summer Ale, a pseudo hefeweizen (or as I’ve heard it called ‘half a hef’). To sum up, they haven’t been known for brewing something that breaks boundaries as of late.

This is all over now.

I don’t know who it is they’ve got in their mad scientist lab, but he’s letting his inner Picasso out. He harnessed his evil genius, took some beer ingredients, strapped lazer beams onto them and stuffed it all into the bottle. The Flying Tanker White IPA really is a Franken-Brew. Part wheat beer, part IPA, part belgian, all craft.

It is a complex brew, where they take the crispness of a wheat, the bitterness of an ipa, a touch of sour belgian style and wrap it in a silky smooth brew. It is the best new beer I’ve had this year.

It pains me to say this but VI has stated this beer is a ‘one off’. If you like it get it while you can. I’ve added a couple to my stock pile. Even though this is only here for a shoft time the statement VI Brewery has made of their craft has been profound. With this release VI has basically said, “We are here, we are craft, don’t let our age fool you.” Many a craft beer lover flocks to the newer brewers like they are at the debutante ball. Vancouver Island Brewery is reminding us that they are still here. They have upped their game, and elevated the VI brewing scene.

I’m certain that beer geeks may pick apart this beer, but I encourage you to drink it with an open mind. Sometimes us beer drinkers forget the idea that a craft beer is just that, a craft. The output of a creative mind. This beer helped remind me of that, and enjoy it. It is, Art in a bottle. 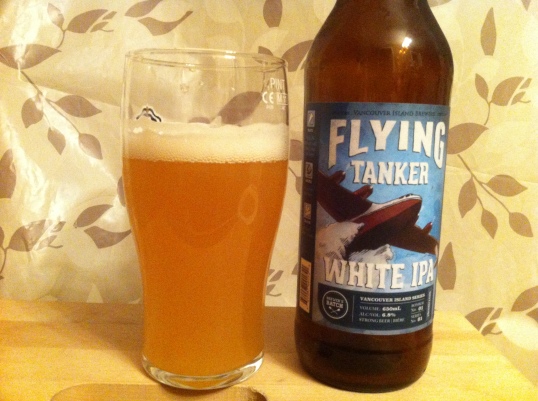 I apologize that the picture kind of sucks. I was in a hurry to drink it and I didn’t want to wait. I’ll take another one later and replace it. Another thing, I didn’t get into the actual taste and notes on this beer, if you want that please read Left4Beer’s post about it as he does a better job at it than I could.  http://www.left4beer.com/2012/05/flying-tanker-vib.html

Thanks for reading everyone, and a big thanks to VI Brewing for this amazing specimen. Keep up the good work.